The Fight for Mar-a-Lago

When Donald Trump visited Palm Beach with his family in the 1980s, he was so impressed with the town, its beach, and its golf courses that he decided to buy an apartment at the Breakers, the storied condominium complex overlooking the Atlantic. When Trump later learned that Mar-a-Lago, the biggest house in Palm Beach, and the 20th largest mansion in the U.S., was for sale, he was interested. 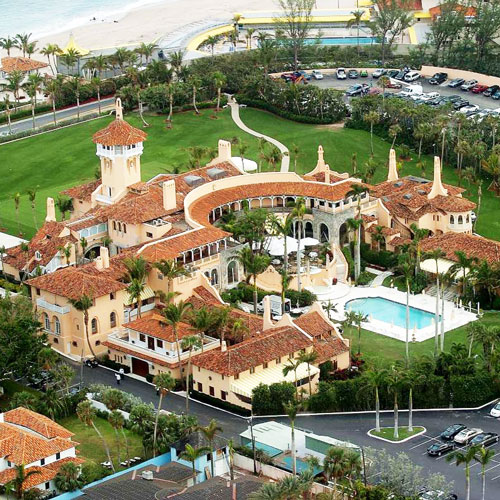 Mar-a-Lago is a property stretching from the ocean to Lake Worth. Town & Country described it as the fantasy of an American in love with the artistic splendor of Europe, the frescoes of Florence and Venetian arches to introduce and frame water passages. The mansion had a ninety-foot castle tower for unimpeded panoramas of sea and sky. There were 58 bedrooms, a ballroom, a theater, and a golf course.

Mar-a-Lago was built by breakfast-cereal heiress Marjorie Merriweather Post in the Roaring Twenties. Shortly before her death, in 1972, she left it to the U.S. government to be used as a winter White House for U.S. presidents. But Nixon preferred his friend Bebe Rebozo's place in Key Biscayne, and Carter's administration, trying to avoid the estate's annual taxes and maintenance costs, returned it to the Post Foundation in 1981.

Trump offered $25 million for the 17 acres, the house, and the furnishings, but the sisters wanted more. He then threatened to buy a beachfront lot in front of Mar-a-Lago, which Post's foundation had sold earlier, and put up a hideous home to block Mar-a-Lago's ocean view. The price kept going down and down until Trump's last offer of less than $8 million was accepted.

When Trump publicly announced his plan to subdivide the 17 acres of the estate and build mini-mansions, a furor ensued. After a year of hearings the Town Council rejected the plan by a unanimous vote.

Some claim that Trump's later decision to turn Mar-a-Lago into a private club was a result of not being invited to join the Bath and Tennis Club. Trump denies: "That club called me and asked me if they could have my consent to use part of my beach to expand the space for their cabanas. I said, 'Of course!' Do you think if I wanted to be a member they would have turned me down?"

The Bath and Tennis Club is the town's premier lunch, pool, beach, and tennis club, frequented by heirs of old American industrial families with household names. It's a beautiful place where it's always summer, where gentlemen in Vilebrequin swimsuits and ladies in pastels and pinks socialize in much the same way they did in the 1920s. The second famous Palm Beach Club is the Everglades, whose membership has included such names as Vanderbilt, Whitney, Du Pont, Kennedy, and Hilton. The current aristocracy includes Trump's secretary of commerce, Wilbur Ross and billionaire David Koch.

Palm Beach's waspy private clubs, as Trump claimed, had an open secret: they didn't admit Jews or African-Americans. So he decided to convert Mar-a-Lago into a private club that is open to everyone. Apparently intimidated by accusations of discrimination, the Town Council voted to approve Trump's plan.

MAR-A-LAGO CLUB MEMBERSHIP LIST A REAL WHO'S WHO, read a Palm Beach Post headline, noting that Steven Spielberg, Henry Kissinger, Denzel Washington, and Elizabeth Taylor, among others, had joined. The club's membership director wrote, in a later article, that Princess Diana and Prince Charles, "each filed their own application and paid their own $50,000 initiation fee."

The club recruited the likes of Céline Dion, Tony Bennett, Billy Joel and Diana Ross to sing in concerts in a 10,000-square-foot tent.

Trump appealed to the Town Council to end restrictions affecting noise and traffic, that had been part of his agreement with the council for approval of his club. Trump implied that the club had been discriminated against because many of its members were Jewish, and, that the council members had not placed those same restrictions on their own clubs. Trump's attorney sent the council members copies of the movies Guess Who's Coming to Dinner, in which Katharine Houghton brings Sidney Poitier home to her parents, and Gentleman's Agreement, in which Gregory Peck plays a reporter who masquerades as a Jew to write about antisemitism. In the end, the council agreed to drop some of the restrictions.

There was one commotion Trump himself couldn't tolerate: airplanes flying over Mar-a-Lago to and from Palm Beach International Airport. Planes were flying over so noisily and so frequently that Trump felt the airport's director "had a vendetta against him". He wanted the county to move the airport, so he organized a "Noise Pollution Action Fund" with his neighbors and sued Palm Beach County four times over the planes, with little success at the time.

Things changed when Trump became president... Mar-a-Lago was turned into a fortress, protected by land, water, and air by the Secret Service. The club indeed became the winter White House that Marjorie Post envisioned, also causing all of Trump's conflicts with Palm Beach to suddenly vanish. Commercial flights could no longer fly in its airspace when the president was in residence. As to the Old Guard, an insider reported: "everyone was lining up to kiss the ring. He was the most important man in the world."